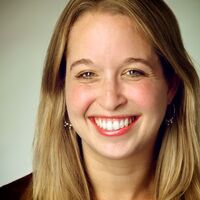 Arianna Haut (b. August 11, 1981) graduated from Washington University at St. Louis, where she participated in the Jeopardy! College Tournament as a senior.

Originally from Topanga, California, Haut lives in Los Angeles and works as a teacher and tutor. She appeared as one of the "Trivia Experts" on GSN's Best Ever Trivia Show and continues on its successor Master Minds.

Before appearing on Best Ever Trivia Show and Master Minds, Arianna appeared on Who Wants to Be a Millionaire and The Chase.

When Arianna was five years old, her parents, Judith and Bob, were contestants on The $1,000,000 Chance of a Lifetime and won the grand prize. Arianna herself appeared on stage with the rest of the Haut family following the big win.