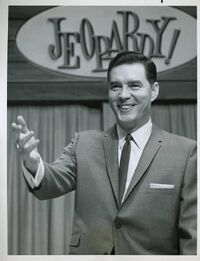 Art Fleming (b. May 1, 1924 – d. April 25, 1995) was an American actor and television personality. He was the host of the original version of Jeopardy! on NBC. Following the network version's cancellation, Fleming briefly reprised his role as the Jeopardy! host in the 1982 movie Airplane II: The Sequel and the 1984 music video for "I Lost on Jeopardy" by "Weird Al" Yankovic. He also appeared on The Name Of The Game, which is not a game show.

Most episodes of these shows as a host, announcer, or other production staff:[]

On April 25, 1995, Art Fleming died from pancreatic cancer at his home. According to his obituary, Fleming had only been diagnosed with the disease two weeks before his death. His ashes were scattered at sea.