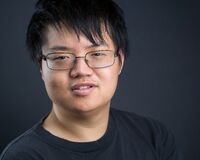 Arthur Chu (born January 30, 1984) is an American columnist and former contestant on the syndicated U.S. game show Jeopardy!. He first became known for the unusual style of play he adopted during his eleven-game winning streak on Jeopardy! When the shows aired, Chu attracted criticism from many for jumping from category to category rather than selecting clues in sequential order, a strategy known as the "Forrest Bounce" after former champion Chuck Forrest.

He prepared extensively before his Jeopardy appearance by reviewing tapes, study guides, game theory, and Jeopardy strategy. He made his debut on January 28, 2014, winning $37,000 in his first game. After winning 11 games, he lost his 12th game (which aired on March 12, 2014) to Diana Peloquin. He is the seventh highest-earning Jeopardy champion in non-tournament gameplay, with a total of $298,200. He also won an additional $100,000 for taking second place in the 2014 Tournament of Champions.

Since appearing on Jeopardy!, Chu has used his fame to speak out publicly on issues that are important to him. He later became a columnist and Internet commentator, writing for The Daily Beast and Salon on various problems, including racism and sexism in nerd culture.

Arthur was born in Albany, New York. His parents immigrated to the United States from Taiwan. He moved several times during his life due to his father's job in the chemical industry. During his childhood, Chu lived in Cranston, Rhode Island, spent a year in Boise, Idaho, then moved to live in Cerritos, California, as a teenager.

As a child, Chu participated in the National Geographic Bee, and while attending Swarthmore College, he was a member of the college's quiz-bowl team. He received a B.A. in History at his graduation in 2008.

Arthur Chu spent a great deal of time preparing in the month before his first appearance on Jeopardy! He studied tapes of former Jeopardy contestants and created study guides based on the advice of Roger Craig; he also read about game theory and Jeopardy strategy online. As a student at Swarthmore College, he also played quiz bowl, in which he has said he was an aggressive player despite having limited knowledge.

Arthur Chu made his debut as a contestant on January 28, 2014-episode of Jeopardy!, winning $37,200 in his first game. On the January 29 episode, Chu made a Final Jeopardy wager that caused him to tie fellow contestant Carolyn Collins. He claimed that he decided to wager for a tie not out of kindness but because of the advice of 2003 College champion Keith Williams, who claims that game theory favors wagering for one over the more common practice of wagering to win by a dollar. He defeated Collins on January 30.

Arthur Chu won his eleventh and final game on March 11, bringing his total to $297,200. On March 12, his streak ended by Diana Peloquin. He ended up in third place after losing his entire score in Final Jeopardy! His third-place earnings of $1,000 brought his ultimate winnings to $298,200, putting him at third place on the list of all-time highest-earning Jeopardy champions, behind Ken Jennings and David Madden. He also held the third-longest winning streak in the series' history, behind the same two gentlemen.

After his initial appearance on the show, Chu competed in the 2014 Jeopardy! Tournament of Champions, where he finished second to Ben Ingram, an IT consultant from South Carolina. Arthur Chu won $100,000 for his second-place finish, bringing his overall winnings to $398,200.

Throughout Chu's 11-game streak, his aggressive style of play attracted criticism among fans of the series, some of whom considered his conduct to be unsportsmanlike and against the spirit of Jeopardy! His strategy earned him the nickname the "Jeopardy! Villain", a nickname Chu fully embraced. One of the most common complaints about his playing style was that he jumped from category to category, a strategy known as the "Forrest Bounce" after former champion Chuck Forrest. The Forrest Bounce is a somewhat common strategy, however, employed by several successful other champions, including Brad Rutter and James Holzhauer, who like him, used it to increase their odds of finding Daily Doubles first. Inspired by Watson, a computer that was programmed to play Jeopardy!, Chu picked high-value clues first because they are more likely to be Daily Doubles. In his second game, Chu wagered $5 on a Daily Double and went "I don't know" immediately after it got given.

Arthur also held the buzzer close to the microphone, resulting in audible clicks when signaling, and upon correctly answering a question, rushed quickly to the next clue. This sportsmanship, the resulting criticism, and his engagement with critics on Twitter during airings of his shows led some to declare his run akin to a Moneyball moment, and Arthur Chu himself ruthless and idol-killingly pragmatic.

In response, both Trebek and Jennings have defended Arthur Chu as a "good player" who makes the game more exciting. In a 2018 interview, Trebek admitted that Chu's use of the Forrest Bounce could be irritating when it disrupted the flow of the game. Although he also praised Arthur Chu and stated, "as the impartial host, I accept disorder."

After his appearance on Jeopardy!, Chu contacted publicists and PR firms to ask for suggestions on how to monetize the recognition from his Jeopardy run. However, he found the proposals unappealing and did not follow the advice that he uses the 'successful game theorist' image. Instead, he began writing a column for The Daily Beast and later for Salon. Arthur has written on various aspects of nerd culture and on being Asian American. He is a vocal critic of racism and online bullying and is known for his opposition to the Gamergate movement.

A documentary feature film about Chu's life, titled Who Is Arthur Chu?, premiered at the 2017 Slamdance Film Festival, directed by Scott Drucker and Yu Gu.

He sits foreground left in a black suit beside Blair, background right, in a blue and white floral dress. He and his then-wife Blair married in 2015. He resides in Broadview Heights, Ohio, and has worked as a voice actor, for one example, on the webcomic Erfworld and as an insurance compliance analyst.

Arthur married science fiction writer Eliza Blair in 2012; the couple met during their time at Swarthmore College. They later divorced.