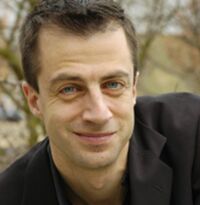 Arthur Peter Monroe Phillips was born in Minneapolis, Minnesota, of Jewish Decent. He received a BA in history from Harvard University in 1990. After spending two years in Budapest (1990–1992), he then studied jazz saxophone for four semesters at Berklee College of Music (1992–93).

In several interviews, Phillips has stated he has been a child actor, a jazz musician, a five-time Jeopardy! champion, a speechwriter, an advertising copywriter for medical devices, and a "dismally failed entrepreneur."

Before becoming a best-selling novelist, Phillips was a five-time champion on Jeopardy! in 1997. In 2005, he competed in the Jeopardy! Ultimate Tournament of Champions. He won his opening-round game but lost in the second round.

Phillips lived in Budapest from 1990 to 1992 and in Paris from 2001 to 2003 and now lives in New York. He got featured on the July 27, 2007-episode of This American Life, reading his short story "Wenceslas Square." The tale is being produced for film by Amazon Studios with a script by Phillips directed by Sophia Takal.