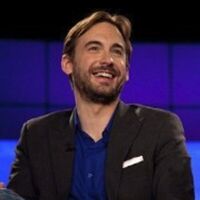 He first appeared on Jeopardy! on October 30, 2000, where he became a five-time undefeated champion (at the time, returning champions were limited to five games) and accumulated $55,102.

The following year, Rutter returned to the stage for the 2001 Tournament of Champions (aired October 22-November 2, 2001). He won the tournament and took home the $100,000 grand prize. He was later invited back for the Million Dollar Master's Tournament (aired May 1-14, 2002), where he became the show's first millionaire after defeating Eric Newhouse and Bob Verini in the two-day finals, winning the $1,000,000 top prize.

In 2005, Rutter was once again brought back for the Ultimate Tournament of Champions, where he faced off Ken Jennings for the first time in the three-day finals. He prevailed over Jennings, winning $2,000,000, and claiming the record for most money won on a game show (until Jennings won $500,000 on Are You Smarter Than a Fifth Grader in 2008).

Rutter and Jennings returned in February 2011 for a two-day exhibition match against the IBM supercomputer Watson. This was Rutter's first defeat overall as he finished in third-place. However, this did not count towards official show records since the event was an exhibition.

Battle of the Decades[]

In 2014, Rutter was invited back to play in the Battle of the Decades tournament. In the finals, he again faced off Ken Jennings; again he prevailed over Jennings, taking home $1,000,000 and reclaiming the game show record.

And in 2019, Rutter and Jennings were two of six team captains for the All Star Games. Both of their teams (named Team Brad and Team Ken, respectively) advanced to the finals, where they faced Team Colby Burnett. Like in the two aforementioned tournaments, Brad's team won the All-Star Games, and the $1,000,000 top prize was split between Rutter, Larissa Kelly, and David Madden.

Greatest Of All Time Tournament[]

Shortly after James Holzhauer won the 2019 Tournament of Champions, it was announced that Rutter, Holzhauer, and Jennings would compete for $1,000,000 in the Jeopardy! The Greatest of All-Time special, which aired in January 2020 on ABC. This time, Ken Jennings defeated Rutter, who didn't win a single match (he was outplayed by Jennings and Holzhauer) and thus finished as the second runner-up taking home $250,000. This was his first defeat to a human opponent.

Brad competed against everyday contestants on revived ABC version of The Chase alongside Ken Jennings (Seasons 1 and 2), James Holzhauer, and The Beast, Mark Labbett (Season 2 only).