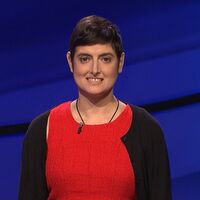 Cindy Stowell (b. July 16, 1975 – d. December 5, 2016) was a science content developer from Austin, Texas, who was diagnosed with untreatable terminal colon cancer after qualifying for the show but before she interviewed for a contestant's seat. Stowell was a lifelong fan of the show. She requested the producers to rush her into taping as soon as possible. Her condition was a stipulation the producers honored. She was under pain management and experienced fever and stomachache throughout her run, during which she managed to win six games and $105,803 in winnings, which got donated to cancer charities. Her fellow contestants were unaware of her terminal illness. Stowell died eight days before her first episode aired. But did get to watch the first three of her episodes when producers provided her with an advanced DVD.

At the end of the Jeopardy credits on December 21, 2016, Alex Trebek gave a tribute to Cindy Stowell and stated, "For the past six Jeopardy programs, you folks have been getting to know the talented champion, Cindy Stowell. Appearing on our show was the fulfillment of a lifelong ambition. What you did not know is that when we taped these programs, she was suffering from Stage IV cancer. And sadly, on December 5th, Cindy Stowell passed away. So from all of us here at Jeopardy!, our sincere condolences to her family and her friends." Then was followed by "IN MEMORIAM Cindy Stowell 2016."

Stowell got posthumously recognized in the 2017 Tournament of Champions, where an additional $10,000 donation to the cancer charities got announced. All 15 contestants wore dark blue ribbons to honor her, as did Alex Trebek; it was 2016 Teachers Tournament champion Jason Sterlacci who had the idea to get the entire field to remember her.