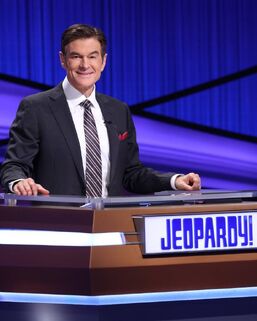 Mehmet Cengiz Öz (b. June 11, 1960), known professionally as Dr. Oz, is a Turkish-American television personality, cardiothoracic surgeon, Columbia University professor, and author of Circassian origin. Oz was a regular guest on The Oprah Winfrey Show in 2004, and his daytime syndicated talk show, The Dr. Oz Show, debuted in 2009.

Oz served as an interim host on Jeopardy! from March 22 - April 2, 2021, raising $268,701 for his charity HealthCorps. Prior to his stint as interim host, he competed on Jeopardy! during Power Players Week in Season 28.