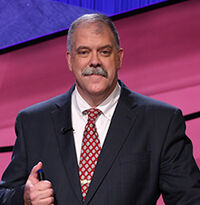 Lieutenant Frank Spangenberg (born July 26, 1957) garnered fame in 1990 when he set the five-day cumulative winnings record on the game show Jeopardy!, becoming the first person to win more than $100,000 in five days on the show. He has been called one of the "veritable legends" of the show.

Because the clue values were doubled in 2001 and the five-day limit for returning champions was lifted in 2003, Spangenberg's record held until 2019 when super-champion James Holzhauer won $298,687 in his first five games.

Retrieved from "https://jeopardyhistory.fandom.com/wiki/Frank_Spangenberg?oldid=10674"
Community content is available under CC-BY-SA unless otherwise noted.