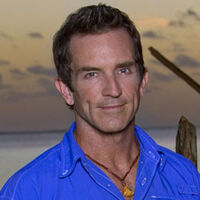 Jeff Probst (born Jeffrey Lee Probst November 4, 1961) is an American game show host and an executive producer. He is best known as the Emmy Award-winning host of the U.S. version of the reality show Survivor. Additionally, he was the host of The Jeff Probst Show, a syndicated daytime talk show produced by CBS Television Distribution from September 2012 to May 2013 that lasted for one season.