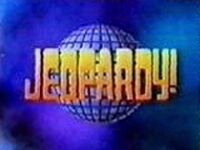 This is about the British version of the game of answers & questions.

Three contestants competed each show, all trying to win money by correctly phrasing answers in a form of a question.

In the first two rounds, the three contestants faced a game board of six categories each with five clues behind point values (30 in all). In 1993, the players scored pounds sterling rather than points.

On a player's turn, he/she selected a category and an amount, then a clue was read. The first player to ring-in with a correct question won the value of the answer, but if he/she rung in and was wrong, the value of the answer was deducted from that player's score and the other player(s) had a chance at it. The player who got the question right or was the last to choose if nobody got the question right got to choose another clue. The round continued until time ran out or if all the clues were played.

Here are the amounts for each round and on each version:

At some point in the round(s), the contestant in control would uncover a very special clue hidden somewhere on the Jeopardy! board called the "Daily Double" (Commonly in high value clue. But on occurrence happened on the second lowest value clue.) On a Daily Double, the contestant who picked it could wager any or all of his/her current score (wagering all was classified as a "True Daily Double"). If the contestant had a low score, had a zero score or had a negative score, he/she could risk up to the maximum clue value (which usually happened) on that clue. In either case, only the contestant who picked it could give the response. A correct response added the wager, but an incorrect response or an improperly-phrased response (even if correct and regardless of the round) or no-response at all deducted the wager. (It was not told how many seconds is the limit, but it seems to be 15 seconds.) Either way, the contestant then chose another clue afterwards. In the 1990-1993 series, there were three Daily Doubles in each round. In the 1995-1996 series there was only one Daily Double in the Jeopardy! round, and two Daily Doubles in the Double Jeopardy! round just like in America, complete with a pictorial clue.

At the end of the Double Jeopardy! round, the three contestants (minus the ones who ended the previous round with zero or a negative score) played the final round, Final Jeopardy! The round started with one last category for that round revealed, and then during the final commercial break, the contestants wrote down how much they wish to wager based on that category, from zero to the total score they accumulated in the first two rounds. When the break was over, the Final Jeopardy! clue under that category was revealed, and then the contestants had 30 seconds to write down the correct response, remembering to phrase it in the form of a question. When the time was up and the music ended, the questions were checked one-by-one and a correct response added the wager but an incorrect response or an improperly-phrased response (even if correct) deducted the wager.

If all three players finished Double Jeopardy! with zero or negative, no Final Jeopardy! round would be played that day, and three new players appeared on the next show.

The player with the most points won the game. If the game ended in a tie, the players who were tied won the game. The winning player(s) won £500 and returned to play the next day. Winning five days in a row won an additional £500 for a total of £3,000. For the 1993 series, player kept their winnings with five-day champions winning an additional £500 bonus. The 1991 to 1993 series featured the top three players playing a Master Jeopardy match for a holiday.

Add a photo to this gallery
Retrieved from "https://jeopardyhistory.fandom.com/wiki/Jeopardy!_(British_Version)?oldid=13856"
Community content is available under CC-BY-SA unless otherwise noted.