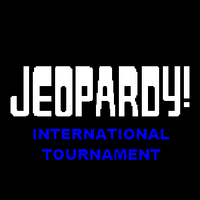 The Jeopardy! International Tournament was a 1 week event that featured champions from various international versions of Jeopardy! All the players who participated in the tournament spoke English fluently. Each tournament resembled the second half of one of Jeopardy's regular two week tournaments, with nine contestants competing in 3 semifinal games before the finals, but the 1996 tournament had a one day final rather than a two day final. Winners received $25,000 in the first two installments, and $50,000 in 2001. Contestants from the American, Danish, German, Russian, and Swedish versions of Jeopardy! competed in each event, among representatives from other international versions of the show.

From Season 17.
Add a photo to this gallery
Retrieved from "https://jeopardyhistory.fandom.com/wiki/Jeopardy!_International_Tournament?oldid=13664"
Community content is available under CC-BY-SA unless otherwise noted.