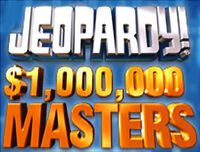 The Million Dollar Masters Tournament was the modern Jeopardy's third best-of reunion tournament, and second to take place during episodes of the syndicated version. Featuring the same two-week, three-round format as the traditional tournaments on Jeopardy!, it was held in honour of the modern show's 4,000th episode, and offered a $1,000,000 top prize, the largest in the show's history to that point. Held at Radio City Music Hall in New York City, the event's first round ran from May 1th to May 7th, and ended with the champions of all five games, as well as four "wild card" non-winners with the highest scores, moving on to the semi-finals. The three semifinal matches were televised from May 8th–10th, with the finals airing from May 13th-14th.

Fifteen fan favourite contestants (all at least a Tournament of Champions semi-finalist) from Jeopardy's first seventeen seasons were invited back to compete in the Million Dollar Masters, as listed below (all were undefeated 5 day champions unless otherwise stated):

2000 ToC finalist Jeremy Bate served as the alternate for the Million Dollar Masters, in the event of contestant in availability.

The quarterfinal round aired from May 1st-7th, 2002. The matchups by order of ranking at the end of the game were:

The semifinal round aired from May 6th-10th, 2002. The matchups by order of ranking at the end of the game were:

The eliminated semi-finalists received $25,000. Newhouse, Rutter, and Verini advanced to the finals, which would see a rematch between Verini & Newhouse, opponents in the 1990 Super Jeopardy! semifinals.

The final round aired from May 13th-14th, 2002. Brad Rutter won his second Jeopardy! tournament in six months to claim the $1,000,000 top prize, making him Jeopardy's biggest cash winner ever (a record he still holds, albeit after trading the title with Ken Jennings from 2004-2005.) Eric Newhouse rallied in the second game to finish in second place, winning $100,000, while Bob Verini finished in third with $50,000

With the exception of Claudia Perry, Leslie Shannon, and Kate Waits, all contestants in the Million Dollar Masters tournament returned to Jeopardy! for 2005's Ultimate Tournament of Champions, where Brad Rutter outlasted 144 other Jeopardy! greats including 74-time Jeopardy! champion Ken Jennings to take home the $2,000,000 top prize to become the biggest game show money winner on television surpassing Ken Jennings and Frank Spangenberg advanced to the semifinals. Rutter, Spangenberg, Eric Newhouse, Bob Verini, Chuck Forrest, and Robin Carroll all received byes to the second round by virtue of their past successes on the show, but only Rutter & Spangenberg advanced further. Bob Harris & India Cooper also advanced to the second round after winning their opening games.

With the exception of Eric Newhouse & Kate Waits, all Million Dollar Masters contestants competed in 2014's Battle of the Decades tournament, where Brad Rutter defeated Jennings again to win the $1,000,000 top prize for his unprecedented fourth Jeopardy! tournament win and regained the all time game show winnings record as well, Chuck Forrest advanced to the semifinals, and both Robin Carroll & Rachael Schwartz advanced to the quarterfinals, with the rest losing their opening game.

Retrieved from "https://jeopardyhistory.fandom.com/wiki/Jeopardy!_Million_Dollar_Masters?oldid=15311"
Community content is available under CC-BY-SA unless otherwise noted.