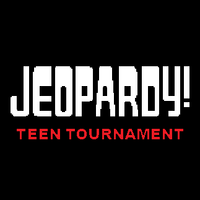 The Jeopardy! Teen Tournament is a special 2-week event that features up to 15 high school students who are between the ages of 13-17. The layout is the same as the Tournament of Champions and other 2 week tournaments. They are 5 quarter-final rounds in the 1st week. The winners move on into the semi-finals on the 2nd week and the 4 high-scorers among non-winners will advance as well. The winner of the semi-finals advances to participate in a 2-day final. The Teen Tournament has been held every season since it's 1987 debut, including two installments in seasons 23 and 35 except for season 31, 32, 34, and 36. The teen tournament returned into rotation starting in season 33. On top of that, the cash payout will be just like the college championship that was in existence since 2004.

In November 1998, Jeopardy! held a special Teen Reunion Tournament in Boston featuring 12 contestants from the inaugural three Teen Tournaments. In a unique format for a Jeopardy tournament, the three highest earners in the four semifinal games played in the one-day final on Friday, similarly to Wheel of Fortune's then-Friday Finals format. 1989 Teen champion Eric Newhouse (the only winner in the field) won the $50,000 top prize over 1988 finalist David Javerbaum and semi-finalist Chris Capozzola, while 1987 finalist Dana Venator was the lowest-earning semi-finalist and did not qualify for the finals.

Until 2000, Teen Tournament winners were invited to the Tournament of Champions, where 8 of 14 advanced to the semifinals, including 4 (Eric Newhouse, Matthew Zielenski, Sahir Islam, and Chacko George) who won their quarterfinal game. However, none of them ever advanced to the final round.

Eric Newhouse was also a semi-finalist in 1990's Super Jeopardy! tournament and a finalist in 2002's Million Dollar Masters tournament. Every Teen Tournament winner to that point (save for Michael Block & Amanda Goad) competed in 2005's Ultimate Tournament of Champions, where 1992 winner April McManus and 1995 winner Matthew Zielenski made the quarterfinals. Newhouse received a bye to the second round, though did not advance further. 1991 winner Andrew Westney also competed in 2014's Battle of the Decades tournament as a fan favorite qualifier for the "1980s decade" round, but did not advance.

2013 winner Leonard Cooper competed in 2019's All-Star Games tournament as a member of Team Austin Rogers. His team wound up competing in the wildcard match where they were eliminated, collecting and splitting $75,000.

†There was a one-week Teen Tournament Reunion that took place on the 15th season.

Season 14 Note: It was used at the D.A.R. Constitution Hall in Washington D.C.

Season 16 for the original studio 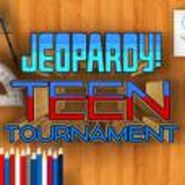 Season 35
Add a photo to this gallery
Retrieved from "https://jeopardyhistory.fandom.com/wiki/Jeopardy!_Teen_Tournament?oldid=14559"
Community content is available under CC-BY-SA unless otherwise noted.