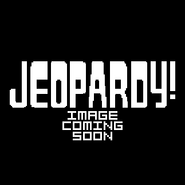 This image is supposed to be the Audio Daily Double Logo

Starting with this season, the first Jeopardy Online logo was used at the end of the show.

Add a photo to this gallery

Retrieved from "https://jeopardyhistory.fandom.com/wiki/Jeopardy!_Timeline_(syndicated_version)/Season_15?oldid=20065"
Community content is available under CC-BY-SA unless otherwise noted.