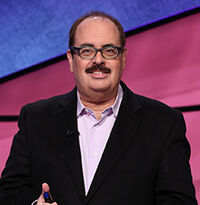 Jerome Vered (born March 13, 1958) is a Studio City, California writer, publicly known for his record-setting success as a contestant on the U.S. television game show Jeopardy!

Vered graduated from Harvard College and the USC School of Cinema-Television. He took the Jeopardy test four times (in 1987, 1988, 1989, and 1990) before being called to the show as an alternate in March 1991. He was not used in any of that day's tapings, but he did return the next year, and became a five-day champion, with winnings totaling $96,801, second to Frank Spangenberg's $102,597. During that run, he shattered the one-day record for dollar winnings, earning $34,000 in one episode.

After his five-day run, Vered returned for the 1992 Jeopardy! Tournament of Champions, finishing in third place and winning $7,500.

Although Vered is best known for his Jeopardy! prowess, he has also dominated in other quiz-show formats, including Win Ben Stein's Money, during which he recorded the first-ever sweep, and became the first to take home the full $5,000 of Ben Stein's money. He would later become a researcher on the show's staff. Vered's game show winnings thus total $501,602.

Vered again appeared on Jeopardy! on February 7, 2014 as a contestant in the Battle of the Decades tournament. He faced Tom Cubbage and Bob Verini, but ended Double Jeopardy! in third place, and finished second to Cubbage, who advanced to the quarterfinals in May.

In 2009, Vered became the first American to crack the top 10 at a World Quizzing Championship with an eighth-place finish.

Retrieved from "https://jeopardyhistory.fandom.com/wiki/Jerome_Vered?oldid=15473"
Community content is available under CC-BY-SA unless otherwise noted.