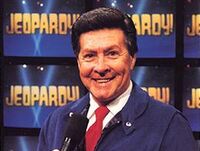 John L. "Johnny" Gilbert III (born July 13, 1928) is a television announcer most famous to game show fans for being the announcer of Jeopardy! since its second pilot in 1984 (also doing the brief 1990 Super Jeopardy! run). Still, he has several connections to Wheel of Fortune.

One of Gilbert's first announcing jobs was the original (1961-62) version of Camouflage, hosted by Don Morrow; Johnny filled-in at least once, on January 8, 1962. Outside of Jeopardy!, he may be most famous as the announcer of the original Bill Cullen version of The Price Is Right for its ABC run (1963-65), filling in for Bill at least once. He also announced on Barry & Enright's The Joker's Wild (1972-75/1977-86) and Tic-Tac-Dough (1978-86), often filling in for Charlie O'Donnell, Jay Stewart, or Johnny Jacobs.

He contributes to the Hasbro Interactive Jeopardy! video games by reading the clues, instead of Alex Trebek.

Retrieved from "https://jeopardyhistory.fandom.com/wiki/Johnny_Gilbert?oldid=20594"
Community content is available under CC-BY-SA unless otherwise noted.