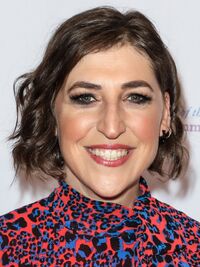 Mayim Chaya Bialik (born December 12, 1975) is an American actress, neuroscientist, and author. She is known for her role as Amy Farrah Fowler on the CBS sitcom The Big Bang Theory. She is also known for playing the title role on the 1990s NBC sitcom Blossom. Bialik served as an interim host on Jeopardy! from May 31-June 11, 2021, playing for National Alliance on Mental Illness. She has raised $194,851 for National Alliance on Mental Illness. It was announced she would be hosting Jeopardy Primetime specials and spinoffs and is currently co-hosting the syndicated series alongside Ken Jennings following the departure of executive producer and intended permanent host Mike Richards. She hosted the inaugural Professors Tournament from December 6-17, 2021 and the Jeopardy! National College Championship primetime spinoff, which aired in February 2022. On July 27, 2022, it was announced that she will officially be the show's new co-host along with Ken Jennings as well as the upcoming Primetime Celebrity Jeopardy!