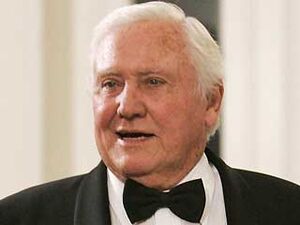 Mervyn Edward "Merv" Griffin Jr. (July 6, 1925 – August 12, 2007) was the creator and executive producer of Wheel of Fortune and Jeopardy!, as well as a talk show host, singer, and star in several forms of media.

Merv broke through in 1950 as a singer with the hit "I've Got a Lovely Bunch of Coconuts", and hosted the Goodson-Todman game Play Your Hunch from 1958-62. Griffin found success as a talk show host, first as a guest host on The Tonight Show and later on his own Merv Griffin Show (Robert Q. Lewis took over on Play Your Hunch, which ended a year later). He also filled in for Bill Cullen on the original version of The Price is Right. as Vanna White on June 20 1980

March 30, 1964, saw the debut of Jeopardy! (What's the Question? during development), which ran on NBC until January 3, 1975, for a total of 2,753 shows; once it ended, the remaining year of the show's contract became the first-year contract for Wheel. The current Jeopardy!, which debuted in 1984, is often paired with Wheel in syndication and usually aired after it, a scenario which also happened for the last two months of its brief 1978-79 revival. Like The Merv Griffin Show (1962) or Merv Griffin Crosswords September 10 2007 on NBC at 4pm

Griffin was also a prolific musician, having composed both the signature Jeopardy! think music and the music package used by Wheel from 1983-2000, most notably the main theme "Changing Keys". While Merv was executive producer of Wheel from the Shopper's Bazaar pilot in 1973, he was not credited on the series itself until January 10, 1990; prior to that, top billing went to John Rhinehart from January 1975 to April 1976 and Nancy Jones thereafter.

In July 1994, he made a deal to remain executive producer of both shows until 2000; this deal included folding Merv Griffin Enterprises into Columbia TriStar Television, allowing the latter to take over the production of both shows starting in the fall of that year.

Merv retired from both Wheel and Jeopardy! in 2000, being succeeded by Harry Friedman.

Add a photo to this gallery
Retrieved from "https://jeopardyhistory.fandom.com/wiki/Merv_Griffin?oldid=10401"
Community content is available under CC-BY-SA unless otherwise noted.