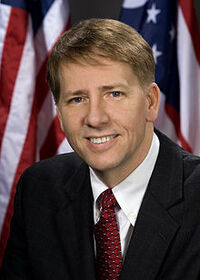 Richard Cordray (born May 3, 1959) was a five-time Jeopardy! champion in 1987, while still serving as a law clerk, and also appeared in the 1987 Tournament of Champions. Cordray parleyed his success on Jeopardy! into political office, serving as an Ohio State Legislator, Attorney General of Ohio, and currently as director of the Consumer Financial Protection Bureau. He was a participant in the Battle of the Decades Tournament, but was defeated in the first match and declined the prize money due to his office.

Retrieved from "https://jeopardyhistory.fandom.com/wiki/Richard_Cordray?oldid=8759"
Community content is available under CC-BY-SA unless otherwise noted.